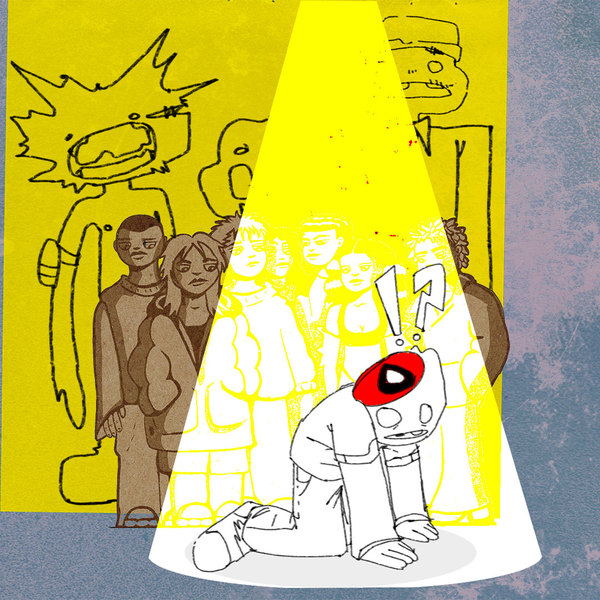 wants you to doubt everything. On their 2021 EP, Be Your Own Celebrity, they use satire to force the listener to think for themselves rather than rely on public opinion.

“I want people to leave the project questioning every decision they’ve ever made. I also want people to come out of it standing for something and not just complaining or sitting around and not doing anything,” the 21-year-old says. “Basically, I’m scolding you. Telling you to follow your own mind.”

Be Your Own Celebrity is Saint David’s response to contemporary pop culture, something they view as being plagued by the regurgitation of ideas. They instead use the project’s experimentalism to lead by example. Their music has garnered support from Paper Magazine, which says, “You’ll remember Black Saint David,” and Chicago Reader, which believes that Saint David “knows how to navigate our genreless future.”

Ironically, the Chicago singer, rapper, producer, and filmmaker doesn’t really seek inspiration from many other musicians. But when it does come to music, they cite Bo Burnham, Marina and the Diamonds, Kanye West, Lana Del Rey, and Lorde as early influences, with Be Your Own Celebrity’s broader campaign, music videos, and visuals evocative of Burnham’s interdisciplinary work as a comedian, musician, writer, actor, and filmmaker.

“Burnham’s music doesn’t sound anything like the music I make. The lyrics are similar. He does satire and it's almost funny but it's too serious to be funny sometimes. That's pretty much what I do. I'll be trying to write jokes that are kind of serious,” Saint David says. “I wake up mad and start recording. It's more so me being like, ‘Come on dawg. Do better.’”

They use RnB bones and add dark-pop aesthetics and sound design to push for innovation. On the opening track, fittingly titled “I’m Anticapitalism, But You Niggas Just Be Broke and Hating,” the beat is marked by a melodic guitar and a low-note bassline as Saint David meanders between rapping and singing. “We gonna see at the end of all this shit who really won / Us or none, my nigga it’s really us or none / I hate the system too but niggas gotta up it run,” they spit, commenting on how capitalism has trapped everyone who was born into it, leaving only the ones who play the game alive.

On “Feezys,” the rapper questions the worth of popularized, material items over a serene, pared-down beat. “He got Feezys on, he ain’t gettin’ money / Goofball dummy, you ain’t reading nothin’ / He said he got diamonds but that shit elastic / Goofball dummy, yeah that shit be plastic,” Saint David sings. As the project comes to a close, on “A Brave New World,” they take a candid approach with their message. “What am I fighting for, what am I standing for / What am I living for, do I know what’s worth dying for,” they ask themselves, forcing the listener to answer the same questions.

Prior to Be Your Own Celebrity, the rapper dropped off a string of projects on their own, with the EPs Free Gems, Be Your Own Shooter, and Blake on Dirt being some of their most recent. Be Your Own Celebrity is Saint David’s debut release with Sooper Records after signing to the Chicago indie darling in May 2021.

“With great power comes great responsibility,” Saint David reiterates. “That's really it. I don't want to make music in vain. But I still want to make shit that niggas can turn up to. I do want to make fun music, but if you listen to it like three times, you’ll be like, ‘Okay, right. Facts. Niggas be tweaking. I be tweaking.’”